Under the O&O ActivityMonitor you can specify the CPU when defragmenting should start and the maximum CPU that O&O Defrag may use. The O&O ActivityMonitor periodically determines degree of use of the CPU. It controls the performance demand of O&O Defrag during a defragmentation and adapts it to the current state. You can thereby work undisturbed while your system is being defragmented in the background. O&O Defrag offers many ways in which you can make your defragmentation even more effective and efficient. The default configurations are already optimized for most systems, which means you won’t normally have to make any changes here. You may, however, also adjust the tuning options yourself.

The settings are valid for recurring jobs and automatically run defragmentation processes, see Automatic defragmentation. You have the possibility to specify further settings of the O&O ActivityMonitor for a specific job in the job dialogue.

Here you can specify that O&O Defrag should not exceed the load of the processor by a certain value during a defragmentation. In addition, you have the possibility to specify that an automated defragmentation not be started if the target drive is in use or other programs are using a high level of CPU.

Here you can specify that automatic defragmentation should not be executed if certain programs are running simultaneously. These might be imaging programs, a virus scanner, or even games. 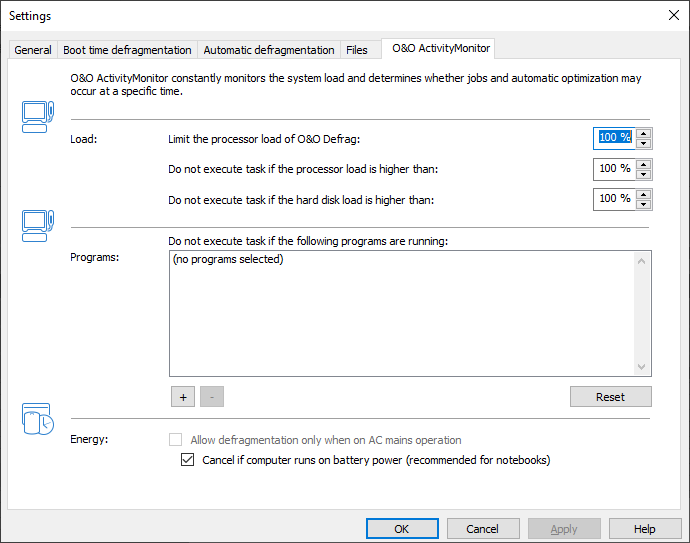