Under Settings in the job dialogue you can influence the default behavior of different drive types during the job execution.

Check drives before defragmentation and cancel if errors exist

You can have O&O Defrag check the integrity of your drives before a defragmentation. If O&O Defrag finds an error on one of your drives, the defragmentation will not be run (for safety reasons). Checking the drives corresponds with the Windows chkdsk function, yet, it only can run scans in the read-only mode and thus not correct errors. In case of error, you need to run the chkdsk command manually.

You can defragment your drives either parallel or sequentially. Sequential defragmentation means that one drive will be defragmented after the other, in alphabetical order.

During parallel defragmentation, partitions that are located physically on different hard disks are processed at the same time. This shortens the total time needed for completing defragmentation but also leads to a higher system load by O&O Defrag. If you only have one hard disk in your computer, all partitions on it will be defragmented sequentially.

Considering the system parameters on how to allocate files.

Only valid for Windows 7, Vista and XP: during defragmentation, the layout.ini file is used as reference to allocate files optimally on the hard disk. The optimal sequence for start files proposed by the operating system will be considered in order to initiate the system start as quick as possible.

Under Advanced options you can specify how different drive types are supposed to be handled during the completion of the job:

You can create status reports in an HTML format. A maximum of 999 reports can be created and saved.

Please enable this function if you want to log all O&O Defrag activities into the Windows Event log. You can specify the detail level for notifications - whereas level 1 only logs errors and level 4 stores all the information available. Please bear in mind that this might lead to many log entries, which in turn overwrite entries by other programs or systems. 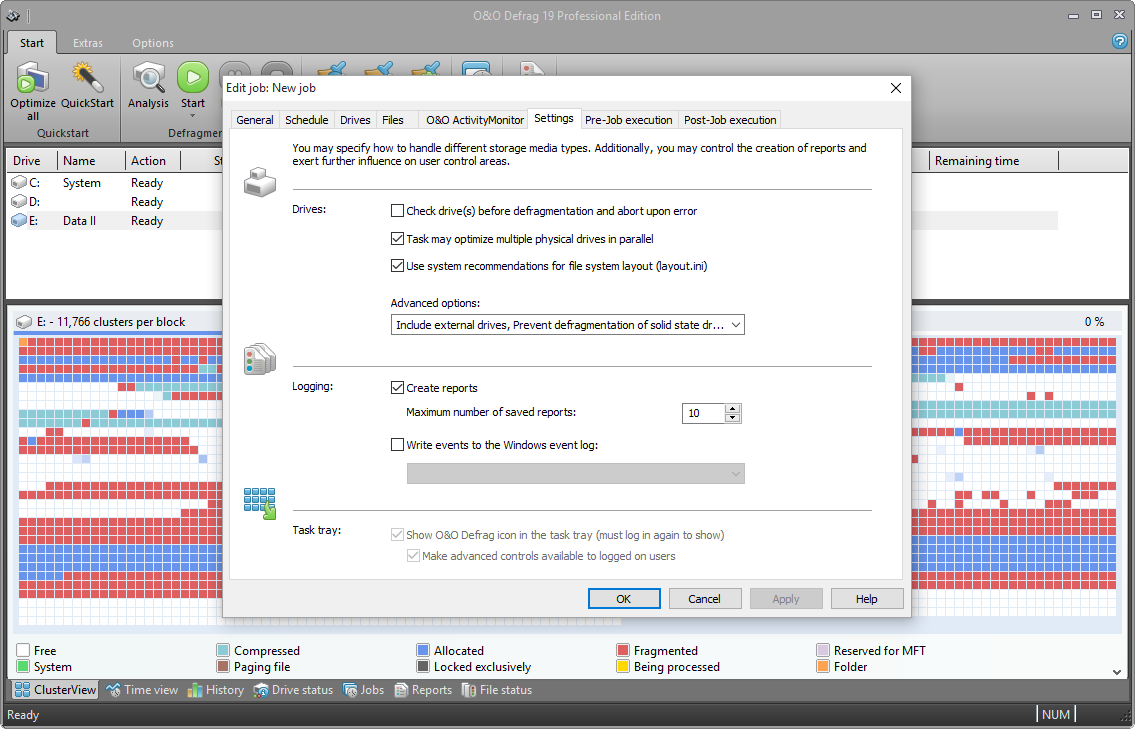 Run scripts before and after a job

Running batch commands before and after a job enables you, for example, to pause certain Windows services before defragmenting and then continuing them afterwards. Files that are normally in use by other applications can now be defragmented online. If you use O&O Defrag on a Microsoft Exchange or SQL-Server, you can pause these services before defragmentation, optimize the drives and then automatically continue with the services. You no longer need to create a script to do this.

Please note: All commands must exist and be capable of running on the target computer. All commands are run under the SYSTEM username with the maximum system permissions.

Running scripts before a job

To do so, simply click the Import button and select the desired file in the dialog box (.BAT, .CMD, or .TXT). Confirm with OK.

Running scripts after a job

If this option is enabled, the commands entered in the text field will be run after defragmentation. The entering and running of commands after a job are similar to those run before a job.